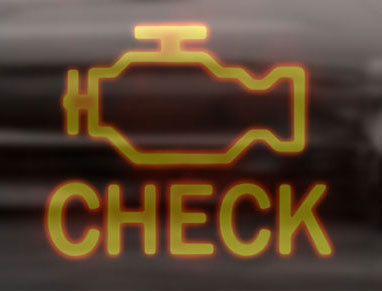 Did that mysterious “check engine” light just come on?  On some vehicles it might be labeled “service needed,” “service engine soon,” “check power train,” or simply “check.”

It’s important to get it looked in to as soon as possible, even if your car is running fine.  The problem could be something as simple as a loose gas cap, or a warning of an immanent major break down.  There are lots of places in San Diego where you can get a free check engine light scan, but you’ll want to go with someone who you trust.  The diagnostic codes reveal which sensor readings or calculations are “out of range,” but not necessarily what needs to be adjusted or replaced.  As a simple example, you may simply have some loose wiring and not actually need a sensor replacement.  You need a mechanic that’s experienced in diagnosis, not just an auto parts store or inexperienced installer.

So What’s Going On

Today’s engines and transmissions are computer controlled for higher performance, improved gas mileage, and lower emissions.  Actually, that’s been the case since 1996.  Before then engine monitoring was much simpler and many older cars only had an brake warning light and perhaps an engine temperature light.  Today’s cars have on-board computers for the engine, transmission, and ABS (automatic braking systems) with a lot more monitoring.  So don’t confuse the those warning lights.

Work once done by the carburetor and distributor are now “automated.”  The on-board engine computer is taking dozens of sensor readings, hundreds of times each second, and adjusting for speed, load, temperature, and so on.  If it detects anything out of the ordinary the OBD (on board diagnostics) will turn on the check engine light and store a fault code known as an OBD II PID code.

You can get an OBD reader yourself, but keep two things in mind.  First, you’ll need one that’s specific to your make and model.  Second, you’ll usually still be left wondering what’s actually wrong.  As just one example, a bad oxygen sensor reading may in fact be the result of a bad catalytic converter.

But don’t ignore it.

Consumer reports provides some great background and tips on what to do at http://www.consumerreports.org/cro/2012/12/what-to-do-if-the-check-engine-light-goes-on/index.htm.

There’s actually two levels of indication.  A steady check engine light on usually indicates an issue that is easily fixed, but don’t continue driving for longer distances. At the very least you’ll be loosing fuel economy (sometimes as much as 40%!).  A flashing light indicates a potentially dangerous problem and you shouldn’t drive the vehicle any further if at all possible.

Here are a few of the more common reasons why that check engine light comes on.

Ignoring the engine warning light, particularly when the OBD codes indicate an O2 sensor, MAF sensor, or cylinder misfire problem can lead to problems both small and large.  Anywhere from replacing spark plugs to replacing a $2,000 catalytic converter.

The other key thing to remember is that the and check engine light and OBD code don’t actually determine the exact problem, but rather points an experienced mechanic in the right direction.

We’ll be happy to do a free check engine light OBD code readout for you, and then one of our ASE certified mechanics can perform a quick fix or properly diagnose a more difficult issue.  We’ve been serving San Diego from the same location for over 30 years with affordable rates and guaranteed satisfaction.  Whatever that warning light indicates we can take care of it, usually the same day.  You’ll also appreciate the personal attention we give you and your vehicle.